Jurassic War: The Making of
Our path towards the creation of Europe’s longest ever immersive tunnel movie. It all started in Berlin, during the Euro Attractions Show. On this occasion, we had the pleasure to meet once again Stefano Cigarini, CEO of Cinecittà World, who shared with us his wish to revamp the immersive tunnel experience of the park. As a matter of fact, hardware needs up to date content in order to live up to the expectations of an audience that is getting more demanding as the years go by. The previous video used within Cinecittà World lost its allure over time and was not so exciting anymore as it didn’t take full advantage of the features offered by the hardware. What’s more, guests were not satisfied with the movements provided by the simulation motion base platform. With this premise in mind, Cinecittà World asked us to design a movie revolving around dinosaurs that could be every bit as good as the best immersive tunnel experiences in the world. A challenge - and a tough one indeed. After this preliminary stage, the next step was to visit the park and have a look at the hardware. The immersive tunnel of Cinecittà World is a very peculiar attraction. It consists of a train, separated in three wagons, that can host up to 90 guests. These vehicles are surrounded by two parallel panels on the side of the train and a central curve.

The three wagons that carry the guests inside the Immersive Tunnel "Jurassic War".

The on-site inspection helped us understand the point of view of the guests, how to develop the immersive experience and the potential issues we could encounter in the production stage. The production stepped up when we started working on the script. Cinecittà World wanted a spectacular story that could emotionally engage the audience with its climax. Scripting has been essential to put the plot down in black and white and understand the movie’s atmosphere, how many characters can be involved and how should they behave in the story. Without a proper script, creating a movie would be impossible. After that, we started working on the storyboard. Thanks to this document, we can understand camera movements, the placement of objects and characters within scenes, use of effects. Basically, the storyboard shows us how the movie will be like. Without a storyboard, you progress with trial and error, and it’s something a production studio has to avoid under any circumstances.

An excerpt from the storyboard of Jurassic War. You can see the camera and the character's movements in red.

Even in this pre-production stages, we’ve worked on distributing characters equally, so that every guest could completely enjoy the experience, regardless of the seat they’re in. More importantly, scripting and storyboarding allowed us to understand how to organize the team for the project. The development team for Jurassic War involved animators, modelers, concept artists, screenwriters, VFX specialists, and 3D lighting artists. The toughest part was to think about a video experience that could fit the very uncommon screen of the attraction. We’ve used 7 stereoscopic cameras focusing on the union between them in order to create a seamless video. Our technical department also developed plugins to export footage from cameras and scripts for frame blending. However, the curved part of the screen was precisely the harder obstacle to overcome. We used all of our expertise with immersive movies in order to create a stunning visual effect. We have managed cameras and lens distortion in order to compensate for the curvature of the screen and provide a realistic visual effect. Creating a realistic experience has been our top priority during the development of the whole project. In order to increase realism, we have studied a method to transfer camera movements directly to the three wagons. That means that the wagons don’t move simultaneously, but each part of the train reacts according to the video. This allows guests to have a different experience according to the wagon they’re in.

Every wagon moves according to the scene and not simultaneously.

The same applies to sound effects. If the soundtrack is poorly executed, the attraction can only express less than half of its potential. Much time was spent in our in-house studio to distribute sound through the 21 channels of the audio system, to create an immersive feeling that could surround the audience.

Thanks to the 21 channels of the audio system we were able to create realistic sound effects, like the roaring of the t-rex.

Video content is fundamental, but context is just as important. Besides video production, sound effects and movement synchronization, we’ve been working together with Cinecittà World to create marketing materials such as pre-show banners, posters, trailers, ads and much more. 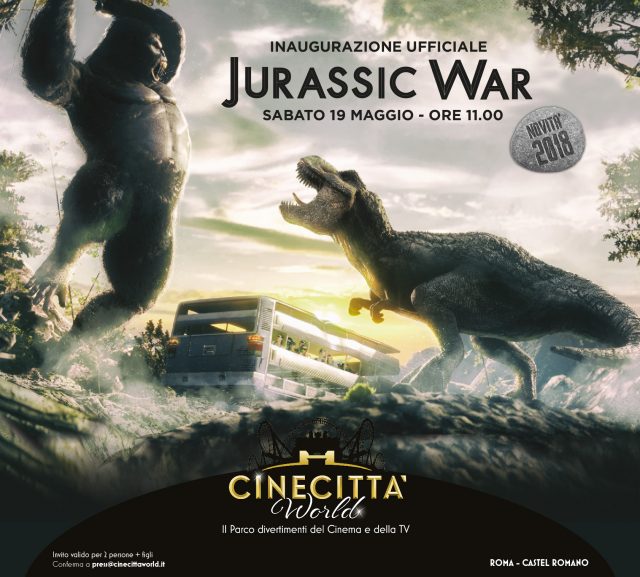 As you can see, a project like this involves a lot of work. We have also created a virtual version of the attraction in our studio and that allowed us to understand the actions of characters and the movements of the platform. But, what about the “test drive”? Actually, this was the most important and fun part. When we tested the video with the hardware for the first time, we were very excited to see Jurassic War coming to life. However, we immediately noticed some technical issues that, of course, were impossible to spot with the virtual simulation. From this point of view, Cinecittà World’s technicians have been fundamental. They’ve been supporting us all the time, performing tests and sending feedback on lens distortion and stereoscopy. Over the five months we’ve worked on Jurassic War, Stefano Cigarini had the chance to appreciate our approach to development - when he asked for changes, we provided them in order to better reflect his vision of the attraction. And when he experienced Jurassic War for the first time, he was amazed by the final results as it was just like he had imagined it would be! We are very happy to have had the opportunity to collaborate again with Cinecittà World. Jurassic War is the only immersive tunnel in Italy and Europe’s longest ever immersive tunnel movie - we hope the guests of the park will enjoy it for years to come!

2125 – An Adventurous Journey Through Time And Space, our partnership with LEG

Watch out the trailer of Moby Dick – Friends to the rescue!

We present to you the making of Moby Dick – Friends to the Rescue!

Announcing our strategic collaboration with Mr. Prakash Vivekanand and ASI!

Do you want to be the first to know about our latest news and access our exclusive content?